All You Ever Wanted to Know about Heat-Not-Burn Tobacco

We may like to think that smoking is so yesterday and that legions of people are finally giving up and becoming healthier. While it’s true in some countries, such as the US and UK, elsewhere, smoking remains an enormous health problem, and it’s estimated that some 1.1 billion people around the world continue to use cigarettes. Half of them will die from their addictive habit.

It’s a “tobacco epidemic” and “one of the biggest public health threats the world has ever faced, killing more than 7 million people a year,” according to the World Health Organization (WHO). “More than 6 million of those deaths are the result of direct tobacco use, while around 890,000 are the result of non-smokers being exposed to secondhand smoke,” the global health body says.

Here in the US, the smoking rate has thankfully been on the decline in recent times, dropping from 20.9% of the population in 2005 to 15.5% in 2016, according to figures from the Centers for Disease Control and Prevention (CDC). But there still remain around 38 million smokers in the country, and tobacco is as much a public health emergency here as it is in other nations, killing close to half a million Americans every year.

Amid this grim, and shocking, situation, in which millions of people are losing their lives to burning leaves each year, there is hope. It’s now far easier to quit tobacco, for instance, as many people are finding they can easily give up by switching to vape pens and other vaping gear, where they get the nicotine they want but none of the killer chemicals found in burning tobacco. Also emerging onto the market in the last couple of years is a growing array of heat-not-burn products, the manufacturers of which claim are far less harmful to human health than lighting up cigarettes.

What Is Heat-Not-Burn Tobacco?

The idea behind heat-not-burn tobacco is that if you warm it to a certain temperature, instead of igniting the dried tobacco leaves and other substances mixed in with them, you can still get the flavor and nicotine hit you want and little else. No smoker, after all, wants to inhale thousands of harmful chemicals that may end up causing cancers, heart and lung disease, and other potentially fatal conditions.

So, with heat-not-burn tobacco, smoke is not generated by the device, but vapor instead — allowing the user to inhale the nicotine and get the satisfaction they’re used to from cigarettes. At least, that’s the theory. The products used for heat not burn look similar to vaping devices, but they still use tobacco while vape gear does not — only e-liquid containing some or no nicotine and various flavors.

But it’s true to say that both heat-not-burn and vape gear operate in much the same way — a battery or other energy source (more below about that) is used to gently warm a chamber that has tobacco or e-juice in it and it then gives off vapor, which the user inhales.

Cigarette companies seem to be falling over themselves to develop heat-not-burn tobacco products and get them onto the market as quickly as possible. Perhaps they’re alarmed at the rates at which people in the Western world are quitting smoking — the result of vape pens, more knowledge about the hazards of tobacco and an overall desire to live healthier lives. The world’s biggest tobacco company and maker of the famous (or infamous) Marlboro brand, Philip Morris International Inc, is also in on the heat-not-burn action, developing its iQOS device, which launched in Japan in 2016 and became a runaway success.

This heat-not-burn gear — which some say is an acronym for I Quit Ordinary Smoking but that the tobacco giant insists is simply “a brand name created to denote innovation and game-changing technology coupled with advanced science” — has since been rolled out in markets around the world, except in the US, where the authorities are probing heath claims ahead of approval — or not, as may be the case. iQOS sales were $823 million in the third quarter of 2018, accounting for 11% of Philip Morris’ overall revenue of $7.5 billion, while globally, heat-not-burn sales last year were worth $5.82 billion and are forecast by research firm Euromonitor International to soar to $18.66 billion by 2022.

In fact, Philip Morris is trying to get out of the cigarette business altogether. At the beginning of last year, the company took out blaring, full-page newspaper ads in British newspapers to acknowledge that cigarettes are bad for people’s health and state that it was aiming to eventually stop making them. That’s not to say Philip Morris is thinking about saving the world and going out of business — far from it. The billion-dollar tobacco behemoth is simply following where the market is going, and some markets for cigarettes are drying up.

Staying with Philip Morris for a moment longer, as it’s the main innovator in the heat-not-burn tobacco sector, the company has introduced another heated tobacco product. Branded as “TEEPS from Marlboro”, the device relies on a carbon-heating source to warm up tobacco and deliver vapor to the user, which the company says is far safer than smoking combustible cigarettes.

“Once the carbon heat source is lit, heat is transferred to a uniquely processed tobacco plug, designed for heating and not for smoking,” says the company. “The patented design of TEEPS prevents tobacco from burning. The consumer puffs on TEEPS to inhale a flavorful nicotine-containing vapor until the end of the experience.”

What Do the Authorities Say about Heat Not Burn?

While Philip Morris is enjoying enormous success with its heat-not-burn products abroad, at home, it’s a vastly different story. The Food and Drug Administration (FDA) wants to know if there’s any truth behind the company’s claim that using its iQOS and other heat-not-burn products is actually safer than smoking ordinary cigarettes. And so it set up a panel of experts to investigate the claim, before going ahead and allowing heat-not-burn products to be available for sale on the American market.

That was over a year ago, and in January 2018 the panel issued its findings into iQOS and its recommendations. It said the device was not safer than smoking cigarettes and that many risks remained, and it rejected data from Philip Morris that appeared to show that the device reduced users’ exposure to harmful tobacco elements by as much as 95%. The FDA panel said some toxic chemicals found in burning tobacco were still present in the heat-not-burn device, and at the same level as those in burning tobacco in cigarettes.

This may, after all, not be so surprising, because tobacco is still the main ingredient in heat-not-burn products, and even if you heat instead of combusting the leaves, the toxins remain in the tobacco and may escape during the heating process. The FDA is not bound by the panel’s recommendation, although the agency traditionally follows such guidance, and it had been expected to make a ruling on the matter a few months later. At present, however, we are still waiting for a decision.

Other Authorities’ Views on Heated Tobacco

Across the pond and health authorities there are also not convinced by heated tobacco’s claims of reduced health risks compared to smoking. They said heat-not-burn devices on the market today are a health risk, as they give off “a number of compounds of concern,” including carcinogens — toxic substances that can cause different tumors, or cancers, to develop in the body. Instead, they say, if you’re looking for something that’s far better for you than smoking, you should use e-cigarettes, which British health authorities now say are at least 95% less harmful than smoking tobacco cigarettes.

The latest on that came from the top health authority in England in January this year. Public Health England — which launched a campaign the same month to try to get people off cigarettes, and urging them to vape instead — said it  “would be tragic if thousands of smokers who could quit with the help of an e-cigarette are being put off due to false fears about safety. We need to reassure smokers that switching to an e-cigarette would be much less harmful than smoking.”

The country, which also includes Wales in its regulatory and legal system (the other two countries that make up the UK, Scotland and Northern Ireland, have separate rules under devolved governments) also runs an annual stop-smoking campaign in October, called Stoptober, and has increasingly been urging smokers to quit with the help of e-cigarettes because of a high cessation rate.

The Last Word on Heat-Not-Burn Tobacco

We started off by referencing the WHO on smoking and lives lost, and we’ll finish with the health organization’s advice on heat-not-burn tobacco. It states straight out that there’s no independent evidence at all to show that heated tobacco products are any safer than tobacco cigarettes, and it dismisses studies funded by tobacco companies that say otherwise.

It says that just because there may be reduced exposure from heat-not-burn tobacco devices, it doesn’t mean there’s a reduced risk to people’s health, as the harmful substances may still be present in the vapor and get into their lungs. The WHO wants to see independent studies carried out into the effects of heated tobacco before it can offer any further advice on the risks associated with using them.

The WHO also says that there may be hazards to those who are around people using heated tobacco devices, just as there are to people who inhale secondhand smoke (killing nearly 1 million people around the world every year, according to WHO figures). It wants to see independent studies on secondhand exposure to heated tobacco.

As for whether iQOS and other heated tobacco devices will be allowed on the US market, all eyes remain on the FDA to see if it will stub out the proposal or not.

All the best vape gear and supplies are waiting for you at the Electric Tobacconist USA vape store. Browse our enormous range of vape kits, refills, vape juice, vape mods, vape tanks, coils, disposables, rebuildables, e-cig batteries, vape accessories, and more. Shop now and when you ship with USPS, all eligible orders over $20* will receive free shipping! 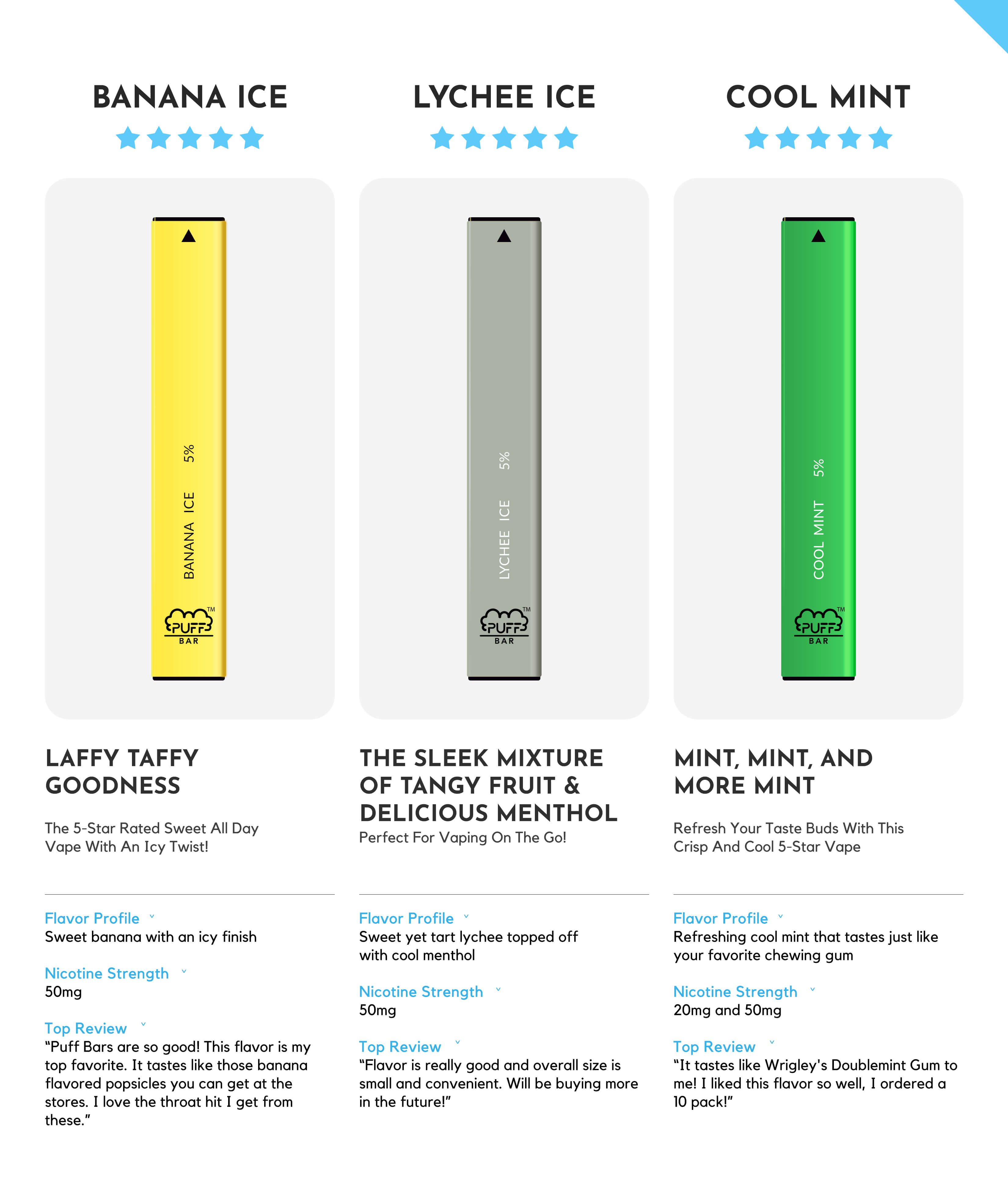 The Ultimate Guide to Puff Bar Disposables and Their Flavors