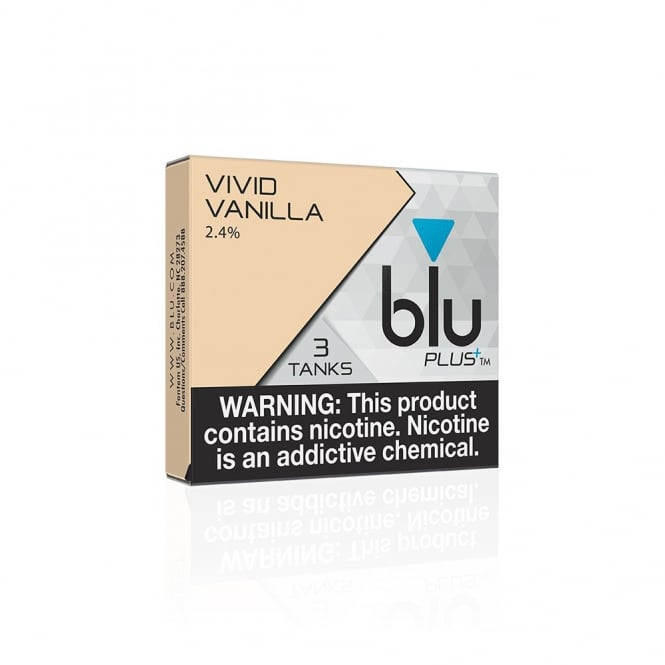 Free Shipping Over $20
At Electric Tobacconist, all orders over $20 receive free shipping!
Code: BLU18
(49)
+ In Stock Now Item in Stock Item out of Stock | Dispatched same day if ordered before 4pm MDT (Mon-Fri)
Loading...
98% Positive Feedback from over 25,000 reviews of our website
100% Secure shopping Pay with PayPal or Credit Card
Free Shipping On Eligible Orders Over $20
Got a question? Click here to view our new help section

The Vivid Vanilla cartridge has had an overhaul. This new version offers a greater throat hit and a smoother flavor than ever before.

Vivid Vanilla is for vapers looking for an alternative to the traditional smoking flavors (tobacco or menthol), but who don't want it too sweet (like Cherry Crush). Vivid Vanilla offers a smooth but subtle taste that is more easily enjoyed throughout the day than some sweeter flavors. The idea is that it's sweet without being too sweet.

As with many non-vaping exercises, you'll find that vanilla mixes well with your day. It goes well in coffee or in a milkshake, in your ice cream or with a banana. For this reason people find that having their Vivid Vanilla blu Tanks™  to the ready will usually complement their every day activities, whist giving them a satisfying vape at the same time.

You can use blu Tanks™ with all blu PLUS™ Starter Kits and Premium100 Packs. They are not compatible with with blu™ Rechargeable or Premium Packs.

The flavor is very good and helped me switch from smoking.

I find these tanks by blu satisfying and easy to use. Most importantly buying from Electric Tobacconist is fast, easy and priced extremely competitive. That is why I only buy from them !

This is my favorite flavor. It’s not too strong st all.

Love the Vivid Vanilla PLUS Flavor Tanks! Thank you for carrying them!

My favorite flavor by far!!! Smooth, not too harsh.

Tastes good, not too much vapor on exhale. Sometimes the liquid oozes out and gets in your mouth.

I would have s as he keep going back to them excellent customer service was missing one of my order and they paid for me even though it wasn't them who lost package and overnight me my product next day you just don’t find customer service like them in today’s world!!!

I prefer Cherry, but these were a pretty good substitute. I enjoy the Blu and it has helped keep me cigarette free for 2 years now. :0)

I like ordering from this company, they have very fast shipping and they always have my flavor in stock.

I really enjoy Blu. They last longer and the device works well also, I have ordered from Electronic Tobacconist for few years now and will continue . Easy web site and customer service.

Love vivid vanilla my favorite mild and sweet no aftertaste

Love this flavor! It’s my favorite!!

Sweet but not too sweet, Vanilla Plus Pods are perfect for people who don’t like tobacco but also don’t like the fruity or obscenely sweet flavors other companies offer. The Vanilla Tanks are by far one of my favorite flavors.