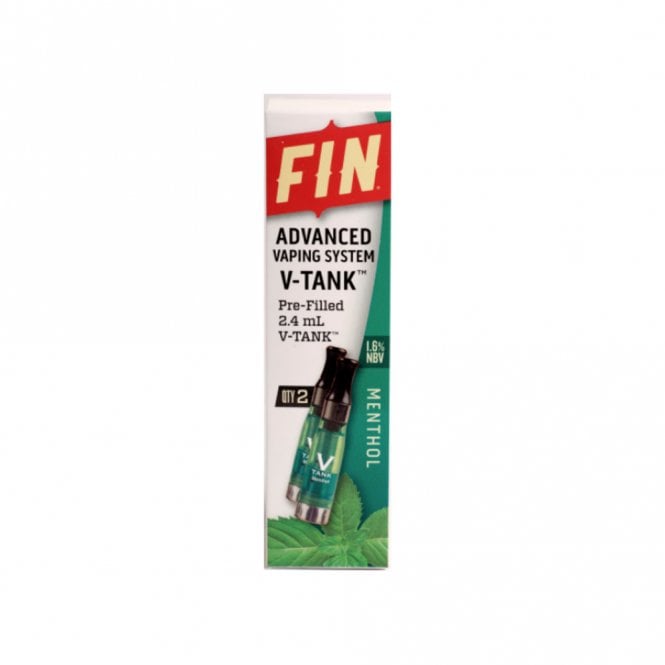 To use FIN's Menthol AVS V-Tanks, simply screw a new tank onto your charged, FIN Spare Battery (sold separately), and voila! You're ready to begin vaping with FIN E-Cigs. FIN's V-Tanks have a 2.4ml e-liquid capacity, which provides approximately 600 puffs per tank on average.

FIN's Menthol AVS V-Tanks come in a pack of two, menthol-flavored pre-filled tanks that contain a 16mg (1.6%) nicotine strength. Searching for the same great flavor, but with a higher nicotine strength? Be sure to check out the full FIN range of AVS V-Tanks refills which are also available in a Tobacco, Bold Tobacco, and Bold Menthol variety.

If a package is returned to sender because the carrier could not collect an adult signature and proof of ID, then Electric Tobacconist reserves the right to re-ship a replacement order only after the original package has been returned to us and processed.

For a full list of shipping costs and services, please read our shipping page here.

We do not ship outside of the United States of America, and we cannot ship to Arkansas, Georgia, Maine, New Hampshire, Vermont or Utah due to state law.

We are currently experiencing issues shipping to North Carolina and Colorado.

If you are shipping to California or Idaho, then your billing and shipping address must match in your state.

We cannot ship to PO boxes or APO/FPO/DPO addresses.

FAQs
Why are there maximum quantity limits on some products?

In order to limit reselling of bulk orders, Electric Tobacconist has implemented a purchase limit for some product categories. This limit is over a 30-day period. Essentially, the limit resets 30 days after reaching a category limit.

You can find a full list of product purchase limits here.

No, we do not ship outside of the United States at this time. Our sister UK vape website ships to most European countries.

You must be at least 21 years of age to order from Electric Tobacconist. We do not ship to Maine, Georgia, New Hampshire, Vermont, Arkansas, or Utah. We also do not ship to Guam, American Samoa, North Marianas, or Anchorage, AK.

How soon can I get my order?

If you order by 2pm MST, Monday through Friday, your order will dispatch the same day.

For a full list of shipping options and delivery estimates, please see our shipping page.

What does your packaging look like?
The packaging we use depends on your selected shipping option.
The sender name will be "ET," with a return address in Boulder, Colorado.
Please note that the shipping label indicates that the package contains ENDS/vapor/tobacco products. Packages also display a PACT Act sticker. There is an additional sticker on packages shipping to California and Connecticut.
How long do vape pods last in general?

I love it! I have been using this product for years!