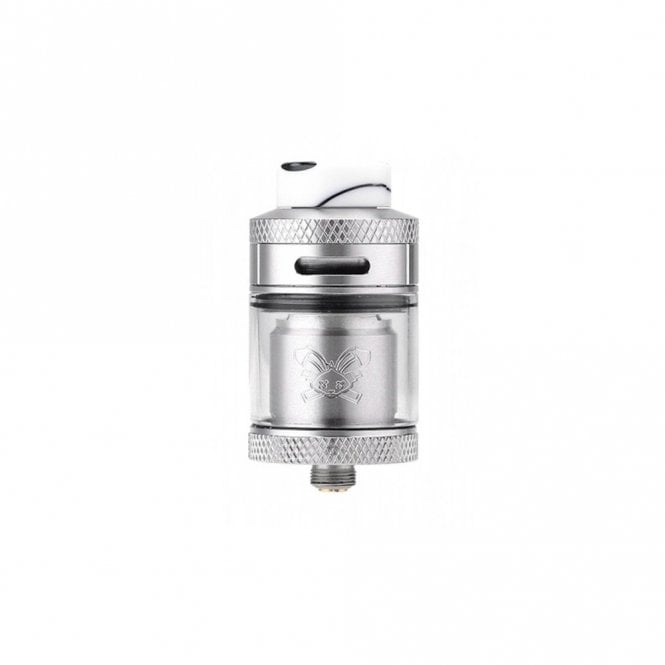 Free Shipping Over $20
At Electric Tobacconist, all orders over $20 receive free shipping!
Rebuildable Tank Atomizer
Code: HEL03
(9 Customer Reviews)
+ In Stock Now Item in Stock Item out of Stock | Dispatched same day if ordered before 4pm MDT (Mon-Fri)
Spot Products:
Loading...
98% Positive Feedback from over 25,000 reviews of our website
100% Secure shopping Pay with PayPal or Credit Card
Free Shipping On Orders Over $20
Got a question? Click here to view our new help section

About the Hellvape Dead Rabbit RTA

The Hellvape Dead Rabbit RTA is a rebuildable tank atomizer designed from the ultra-popular rebuildable dripping atomizer of the same name. With massive cloud production, intense flavor, and a user-friendly build deck, the Dead Rabbit RTA has proven to be one of the best RTAs on the market.

Building on the Hellvape Dead Rabbit RTA is just as simple and hassle-free as the RDA with its unique "Rabbit Ear" posts that allows you to easily drop in and clip coils. The four-terminal design allows for ample space that can accommodate bigger and bulkier coils. The Hellvape Dead Rabbit RTA features a top side airflow system that simultaneously prevents leaking while providing immaculate flavor and clouds.

The Dead Rabbit RTA was built with ease-of-use and quality manufacturing in mind. A gold-plated positive post, large lead holes, and flat-fastened coil screws give increased conductivity and consistency. The Hellvape Dead Rabbit RTA can also work with both single coil and dual coil builds.

If you’re looking for a rebuildable vape tank that is a breeze to build on and gives incredibly dense and flavorful vapor production, the Hellvape Dead Rabbit RTA is one you won't want to pass up.

Please note: RTAs and other rebuildable atomizers are intended for use by intermediate and advanced vapers only.

Easily one of the best rta Ive owned. Epic flavor and massive clouds. A+ all the way.

This is the best rda I have owned. I have purchased 3 because they or easy to load juice and insert homemade coils. I use the bubble glass that comes with it. Don't screw the top fill cap to tight as it will make the top air intake hard to adjust. Only flooded once because I cut my wick tails to short.

Excellent flavor, love the airflow at the top rather than near the mod.

I just got into making my own coils and the ease of installation and the flavor off The Dead rabbit sold me. I will never go back to coils for a subomn tank. Easy flavorful great looking. What else does anyone want.

It’s a great RTA for the price. Easy to build on, sharp looking, and fairly well made. It comes with any spare o-ring or screw you could possibly need. It does like to leak if left laying horizontal, but that’s the only issue I’ve experienced. Hasn’t given me any major issues! Would buy again!

Good quality deck, easy build than some of the rta's, quality is compatible to the other higher priced rta's, pricing is better than other rta's. Great for price

I've wicked this multiple ways from .2 to .6 ohms and no matter what wattage or set up, this thing gets scary hot. Flavor not that great. I've tried Japanese cotton, Cotton Bacon, agelated cotton (Wotofo). I tried coils nearly touching the deck to nearly touching the chimney. Doesn't matter. Flavor just isn't great.