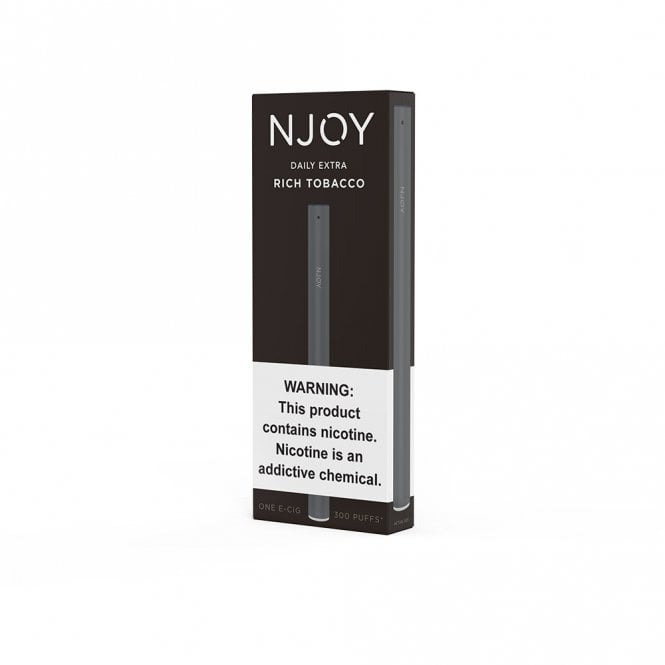 Free Shipping Over $20
At Electric Tobacconist, all orders over $20 receive free shipping!
60mg
Code: NJO20ERT
(46 Customer Reviews)
+ In Stock Now Item in Stock Item out of Stock | Dispatched same day if ordered before 4pm MDT (Mon-Fri)
Loading...
98% Positive Feedback from over 25,000 reviews of our website
100% Secure shopping Pay with PayPal or Credit Card
Free Shipping On Orders Over $20
Got a question? Click here to view our new help section

The design of the NJOY Daily represents a move away from traditional cigarettes. Whereas its predecessor (the aforementioned NJOY King) was designed to look exactly like a cigarette, the NJOY Daily E-Cig has maintained all the important qualities, ie soft filter and the mouth end, small and portable feel and great, authentic taste, the color and LED light have changed to reflect changing perceptions of the disposable e-cigarette.

E-cig giants NJOY first rose to prominence because of their ability to replicate a pure burning tobacco taste in vapor form (not an easy task). The Rich Tobacco flavor is a new blend not seen before in either the NJOY e-liquids, disposables or flavor chambers ranges. Fans of NJOY products will also enjoy the latest line of Puff Bar disposables.

Njoy Daily Rich Tobacco Extra is the most satisfying E-cig that I have ever tried. This product has been the only thing that satisfies the nicotine craving and has helped me to quit smoking cigarettes for good. The draw is just right, the taste is gratifying, the whole experience is both comforting and pleasurable.

This product has helped me quit smoking Marlboro red, I highly recommend it!

My go to as an escape from flavored products. Good smoke and quality.

Have found that the best thing is quite often a traditional thing. Have not found a "flavor" that I truly like so, I have returned to the root of my smoking enjoyment. Value is quite good and the "soft-tip" is a must for me

Very pleased with this product as a substitute to 1 pack/day cigarette habit.

Just a fairly smooth, dependable "smoke." Feels like a cigarette and lasts longer then most other products I have tried.

Good hit, convenient to carry since there's no refill required.

Accurately replaces the feel, taste and hit to the throat.
Built very well for a disposable cig, but battery could last longer.
Great value compared to retail prices.
By far, the best disposable e-cig made.

Shipment always arrives as promised and on time.

Taste more like a cigarette than any other e-cig i have tried, they do have a little extra punch than the smooth... great for people just quitting smoking. plus they are lasting almost twice as long as other e-cigs. I have read other reviews say some were dead when they got them. Not me so far, but its not a perfect world. That is what customer service is for.

for the price they are great disposable ecigs

Good quality product, wide selection of flavors and strengths . I'm sure there are other products which are just as good, but for the time being I will continue to buy these.