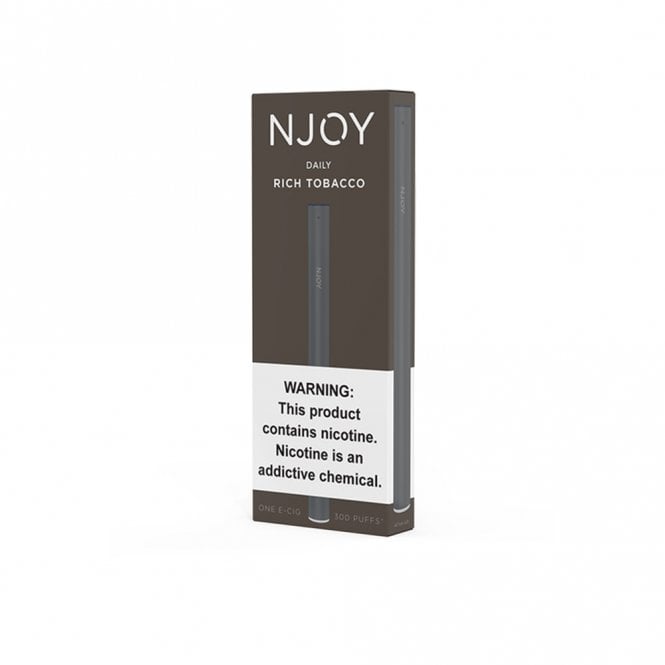 Free Shipping Over $20
At Electric Tobacconist, all orders over $20 receive free shipping!
45mg
Code: NJO20T
(128 Customer Reviews)
+ In Stock Now Item in Stock Item out of Stock | Dispatched same day if ordered before 4pm MDT (Mon-Fri)
Loading...
98% Positive Feedback from over 25,000 reviews of our website
100% Secure shopping Pay with PayPal or Credit Card
Free Shipping On Orders Over $20
Got a question? Click here to view our new help section

The design of the NJOY Daily represents a move away from traditional cigarettes. Whereas its predecessor (the aforementioned NJOY King) was designed to look exactly like a cigarette, the NJOY Daily E-Cig has maintained all the important qualities, ie soft filter and the mouth end, small and portable feel and great, authentic taste, the color and LED light have changed to reflect chaging perceptions of the disposable e-cigarette.

E-cig giants NJOY first rose to prominence because of their ability to replicate a pure burning tobacco taste in vapor form (not an easy task). The Rich Tobacco flavor is a new blend not seen before in either the NJOY e-liquids, disposables or flavor chambers ranges. It provides a strong throat hit, and when tested against the Vuse Solo E-Cigarette, four out of five people said they preferred the NJOY Daily E-Cig.

I have tried many disposable cigarettes over the past couple years and I have found that the NJoy disposables are the BEST and I have found the best place to purchase these from. I truly enjoy the Rich Tobacco flavor one. I have been ordering on line from Electric Tobacconist for several months and their website is so easy to use and the promptness upon receiving the products is excellent! Also their customer service response is awesome. They immediately respond back to you with any questions you may have. They have my vote and I will continue to order my products from them.

Have found that the best thing is quite often a traditional thing. Have not found a "flavor" that I truly like so, I have returned to the root of my smoking enjoyment. Value is quite good and the "soft-tip" is a must for me

Flavor great, but one didn't work at all and the rest died very quickly.

Tastes pretty good. Wish it lasted longer for the price. They shorter lived than say six months ago.

NJOY is the best disposable out there. Good life for the cost, very lightweight and great flavor!

I have tried a few other disposables and by far these are my favorites. After smoking 50 years these have done the trick. I haven't had a cigarette since the end of February. I ordered 10 and so far I did have one that didn't work out of the box. I disassembled and found a bad battery post. I tried swapping out battery with an used one with mixed results. I can only hope that this problem doesn't happen frequently.

Love the product! No chambers to fill or oils to spill. Great & quick service on all orders. Pricing less than buying retail.

Have used these for years, great taste, easy to use, disposable, no problems.

I likethe product..been using it for years/ My only issue has been the number of dudes i received in each order. I order 40 at a time and I've had as many as 4 bad ecigs in one batch. It's gotten much better in the past few months.