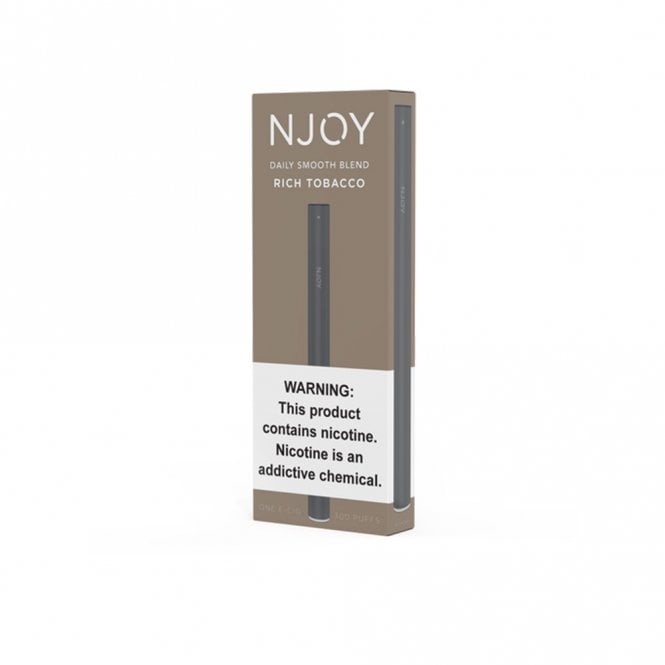 FREE USPS SHIPPING OVER $20
At Electric Tobacconist, all eligible orders over $20 receive free USPS shipping!
45mg
Code: NJO20SRT
(12)
+ In Stock Now Item in Stock Item out of Stock | Dispatched same day if ordered before 4pm MDT (Mon-Fri)
Loading...
98% Positive Feedback from over 30,000 reviews of our website
100% Secure shopping Pay with PayPal or Credit Card
Free USPS Shipping On Eligible Orders Over $20
Got a question? Click here to view our new help section

The design of the NJOY Daily represents a move away from traditional cigarettes. Whereas its predecessor (the aforementioned NJOY King) was designed to look exactly like a cigarette, the NJOY Daily E-Cig has maintained all the important qualities, ie soft filter and the mouth end, small and portable feel and great, authentic taste, the color and LED light have changed to reflect chaging perceptions of the disposable e-cigarette.

E-cig giants NJOY first rose to prominence because of their ability to replicate a pure burning tobacco taste in vapor form (not an easy task). The Rich Tobacco flavor is a new blend not seen before in either the NJOY e-liquids, disposables or flavor chambers ranges.

What's the quickest I can get my order?
We offer USPS Priority Express overnight shipping and USPS Priority shipping (1-3 days, not guaranteed) options in addition to standard shipping.
All shipping options and prices can be viewed and selected at checkout.
UPS shipping is available for all states that we ship to except New York. Transit time varies from 1 to 4 days based on distance from Boulder, Colorado. Click here and enter ZIP code 80301 to see approximate transit times based on your location.
What does your packaging look like?
The packaging we use depends on your selected shipping option and order size. Generally, you will receive a generic first-class bubble envelope, Priority flat-rate envelope, or Priority flat-rate padded envelope.
The sender name will be "ET", with a return address in Boulder, Colorado.
Can I recharge this product?

I am very happy with my Daily Rich Tobacco. It is quite nice not to have to charge anything as I used to do with my other NJOY product. All is well in the e-cigarette world as far as I am concerned.

Excellent service. Quick delivery. Quality product. A++++ Online Store. Have made several purchases from this reputable business and the product is always superb!!!!

I am quite happy with these e-cigarettes...If anything they are too good so I smoke more.

Have found that the best thing is quite often a traditional thing. Have not found a "flavor" that I truly like so, I have returned to the root of my smoking enjoyment. Value is quite good and the "soft-tip" is a must for me.

Good flavor, not harsh. Did not last very long though - a day and a half.

I like this product. I learned that high temps shorten the battery life more than 50%, though. Had I realized this I would have kept them in the fridge as I was away from A/C with heat indexes over 100F.

Taste more like a cigarette than any other e-cig i have tried, plus they are lasting almost twice as long as other e-cigs. I have read other reviews say some were dead when they got them. Not me so far but its not a perfect world. That is what customer service is for.

Have used these for years, great taste, easy to use, disposable, no problems.

Has a similar flavor to the non-smooth version but I find all "smooth" versions of these Njoy's only seem to last half as long as an original. Not sure if the smoother draw makes you feel less of a throat hit causing you to pull harder than on a regular but I find I can get 2-3 days out of an original but only about 1 day off a Smooth. Even though the design is much nicer looking I doubt I can afford to spend the money on a "smooth" Njoy again.

I really enjoyed the NJOYs They feel and smoke like a real cig. They have a fairly long life as well. Both flavors Ive tried are really good.