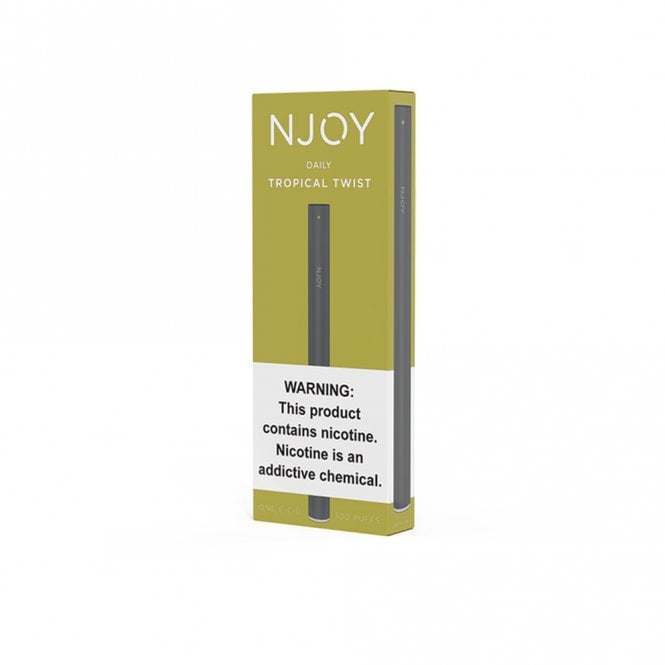 Free Shipping Over $20
At Electric Tobacconist, all orders over $20 receive free shipping!
45mg - pineapple, kiwi flavor
Code: NJO57
(58 Customer Reviews)
+ In Stock Now Item in Stock Item out of Stock | Dispatched same day if ordered before 4pm MDT (Mon-Fri)
Loading...
98% Positive Feedback from over 25,000 reviews of our website
100% Secure shopping Pay with PayPal or Credit Card
Free Shipping On Orders Over $20
Got a question? Click here to view our new help section

The NJOY Daily was launched in September 2015 as a follow-up to the very successful NJOY King. The product is claimed to be 90% as satisfying as a combustible cigarette during the first seven minutes.

The NJOY Daily is also available in tobacco, menthol, and Blue+Blackberry flavors.

About the Tropical Twist Flavor

Ordered 2 one was broken but the flavor was great

Amazing quality product, even compared to buying it in person locally. The packages come carefully wrapped in bubble wrap so it's unlikely to get damaged during shipping.

Great brand, pretty good lasting for a disposable (about 3-4 days of medium use), but this flavor just wasn't for me.

Great Flavor. Not overly sweet. This is my favorite.

Love the disposables. Only gave 4 stars bc since they changed the look, they do not last as long as they use too.

Best flavor of all the daily flavors

NJOYs feel most like a cigarette to me . Tropical Twist has a better , more citrus like taste to me than the melon flavor . I also like the cool menthols.I they are as close to Newports as a disposable e cig is going to get . I was a 1-3 pack a day smoker and the muscle memory and feel of the NJOY disposables has been very effective in satisfying most of if not all of my cigarette habits .

I love pineapple so that's why I tried it but it had kind of a mango ishq flavor that I didn't care for it. But they were still good as far as the nicotine level

Again one of my favorites. I like this one in the evening its like having a treat or a mix drink and getting to enjoy the relaxing of a vap all in one.

The NJOY e cigs are as close to a cigarette as an e cig can get . I prefer the Tropical Twist pineapple / kiwi flavor but the berry or menthol will do pretty well too . They feel like a smoke in my hand and draw a bit like one as well . The filter end is soft like a cigarette filter and is easy to hold in my mouth like a cigarette . The only drawback of the NJOYs is that they don't last 300 puffs . 300 precocious smoking , beer drinking toddler puffs maybe but not grown adult drags/ draws .

love my njoy ! they really feel like a cigarette. i don’t love the lifespan , it’s nowhere near 300 puffs unless the manufacturers mean tiny baby monkey puffs .

Only wish they made this in extra.

Such a great taste!

It is a little light on flavor but I ordered them on Friday and got them Monday. I love this company!