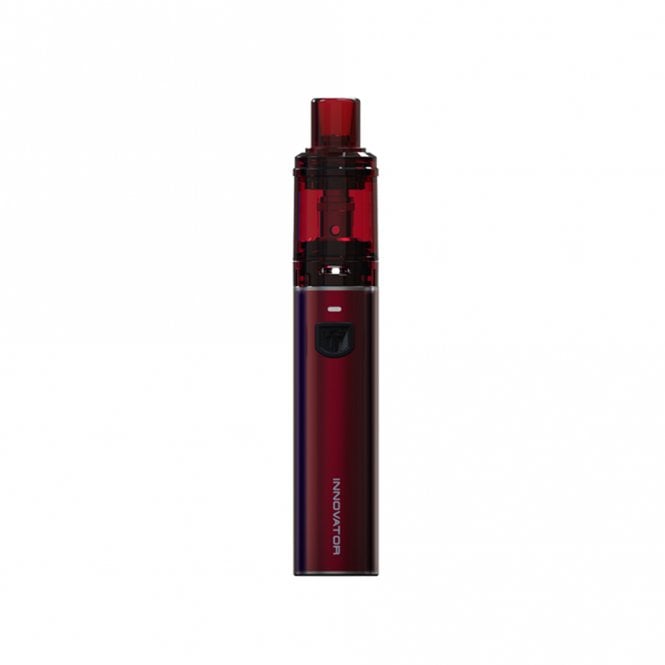 About the Innovator by Teslacigs

When you hear that a product is named Innovator, you probably expect it to be groundbreaking, right? Well, on that count, the Innovator vape pen kit from Teslacigs certainly delivers. Although the Innovator is only 19mm x 64mm in size, it features a powerful 1100mAh battery, a 1.8ml refill capacity, and a 25W max output. No, you're not going to win any cloud-chasing competitions with this device, but you will find that the Innovator gives you decent cloud production (and incredible flavor) despite its small size.

The Teslacigs Innovator is made of high-quality stainless steel and is available in a variety of glossy colors. Because the Innovator is so compact, it will easily fit in your pocket or purse. When you're on the go and don't want to carry a big box mod with you, the Innovator vape pen is the perfect alternative.

To turn on the Teslacigs Innovator, rapidly press the firing button fives times in succession. An LED indicator light will let you know that it's on and ready to vape. To charge the battery, simply plug the included USB charging cable into the port on the back of the pen. The Innovator has a charge time of 1.2 hours.

If you're in the market for a small but mighty vape pen, then the Teslacigs Innovator is an excellent choice!

Included in the Innovator vape pen kit is the 19mm Citrine vape tank, which comes with a 0.6ohm T-A1 coil that is best suited for 15W–30W. (Replacement T-A1 and T-A2 coils are sold separately.) With 510 threading, adjustable airflow, and a top-fill design, the Citrine has all the features you want in a high-performing vape tank. To fill the tank, simply unscrew the top cap and add your vape juice in the fill ports. Remember to prime your coils for at least five minutes before vaping in order to prolong coil life and improve the taste of your juice.

What's the quickest I can get my order?
We offer USPS Priority Express overnight shipping and USPS Priority shipping (1-3 days, not guaranteed) options in addition to standard shipping.
All shipping options and prices can be viewed and selected at checkout.
UPS shipping is available for all states that we ship to except New York. Transit time varies from 1 to 4 days based on distance from Boulder, Colorado. Click here and enter ZIP code 80301 to see approximate transit times based on your location.
What does your packaging look like?
The packaging we use depends on your selected shipping option and order size. Generally, you will receive a generic first-class bubble envelope, Priority flat-rate envelope, or Priority flat-rate padded envelope.
The sender name will be "ET", with a return address in Boulder, Colorado.
What's the difference between a vape pen, an AIO and a pod mod?

Names are often manufacturer-led, but some websites label things differently. We like to distinguish the different types of vape devices and vape kits as follows:

What is the warranty period on this product?

This product comes with a 60 day warranty from the date of order. However, this does not cover misuse, damage or standard wear and tear.

Please note: with some starter kits we will look to replace parts rather than the entire kit if a fault can be remotely diagnosed.

Power,smooth,small and best of all Taste!! love it

Tesla innovator has me switching from others due to its unreal flavor and power in such a small vape I now have 4 of them!!!

For my first Vape pen its awesome! I love it ! Have not had any problems with it at all !!

Great Lil device. Easy to maintain and no leaks. The 0.6 coil run to hot for my liking but its not a bad coil and works. The 0.9 was perfect for me.