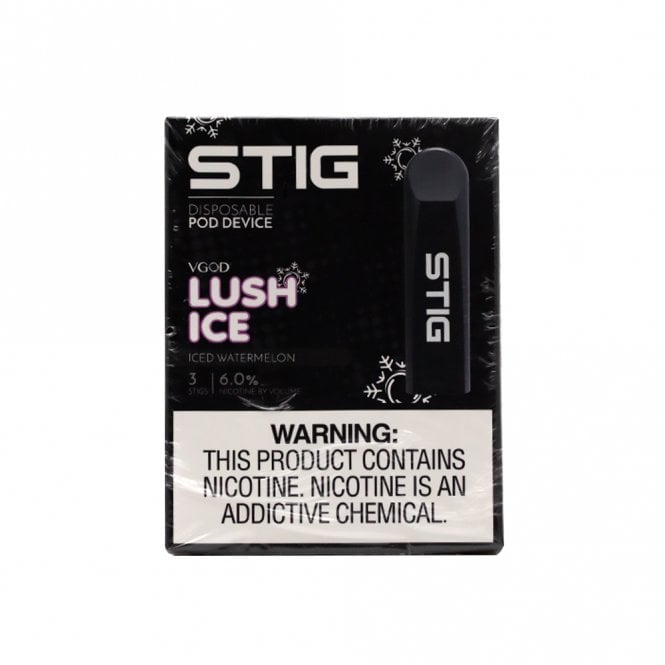 VGOD
product
Order now and we will dispatch within the next
98% Positive Feedback from over 30,000 reviews of our website
100% Secure shopping Pay with PayPal or Credit Card
Free USPS Shipping On Eligible Orders Over $30
Got a question? Click here to view our new help section

About the VGOD STIG - LushIce

The VGOD STIG is a slim disposable pod mod filled with SaltNic juice for an ultra-convenient and satisfying vape on the go.

The VGOD STIG is a reimagining of the humble cigalike, providing a quick and easy vaping experience with no need to refill, recharge or change coils. The STIG, however, utilizes VGOD’s own SaltNic juice for an unbelievably smooth and satisfying vape. Nic salts are absorbed quickly into the body, which closely mimics the sensation of smoking a traditional cigarette. This VGOD STIG comes in LushIce, a frosty watermelon flavor that fruit fans will love.

The VGOD STIG is available in a range of popular SaltNic flavors, including Mighty Mint, Cubano and the popular Tropical Mango.

If you’re looking for absolute simplicity but don’t want to compromise on flavor or satisfaction, the VGOD STIG is the device for you. Each VGOD STIG holds 1.2ml vape juice at a nicotine strength of 6%, which should last around 300 puffs (roughly 20 cigarettes). VGOD STIGs come in packs of 3.

What's the quickest I can get my order?
We offer USPS Priority Express overnight shipping and USPS Priority shipping (1-3 days, not guaranteed) options in addition to standard shipping.
All shipping options and prices can be viewed and selected at checkout.
UPS shipping is available for all states that we ship to except New York. Transit time varies from 1 to 4 days based on distance from Boulder, Colorado. Click here and enter ZIP code 80301 to see approximate transit times based on your location.
What does your packaging look like?
The packaging we use depends on your selected shipping option and order size. Generally, you will receive a generic first-class bubble envelope, Priority flat-rate envelope, or Priority flat-rate padded envelope.
The sender name will be "ET", with a return address in Boulder, Colorado.
Can I recharge this product?

Amazing! Doesn’t leak, doesn’t get burnt that often (at the end sometimes it does but it’s like a 3% chance) and it lasts for a decent amount! Great buy for the money!

This is my favorite flavor and they are small and are very smooth.

Good flavor and a good price. If you're looking for a juul alternative these are great and you get more juice for the same price.

My go to device. Good flavor and lasts for a decent amount of time. Price is a few dollars cheaper then other places. I've been ordering from ET awhile now and never had an issue.

A some of them leak and the battery sometimes dies before the juice is out.

The only pods I use! I love them! Fast shipping and always fresh!

Love the product and being able to order it from you which is saving me money right now is so great! They are way more expensive at the local stores. I'm saving money and i don't have to go in the stores or leave my house in this pandemic. Thank you!

I need 15 box of lush ice
Thanks

Shipping is fast and the product is amazing!!

Stig Lush Ice vapes are the most consistent and satisfying disposables out there.

They come in a 3 pack, awesome taste,

I love this product and your prices are WAY better than anywhere I've seen. Thank you!

These stigs are not very potent in flavor compared to a puff bar or others. Definitely feel the 5%.

These are great pods with a refreshing flavor! Three in a pack for a decent price! Plus, shipping was so fast! Definitely recommend.

they are the longest lasting disposable i’ve ever used, a puff bar lasted me 6 hours and the stig lasted me 2 and a half days

This is my absolute favorite disposable vape! So yummy and lasts a perfect amount of time.