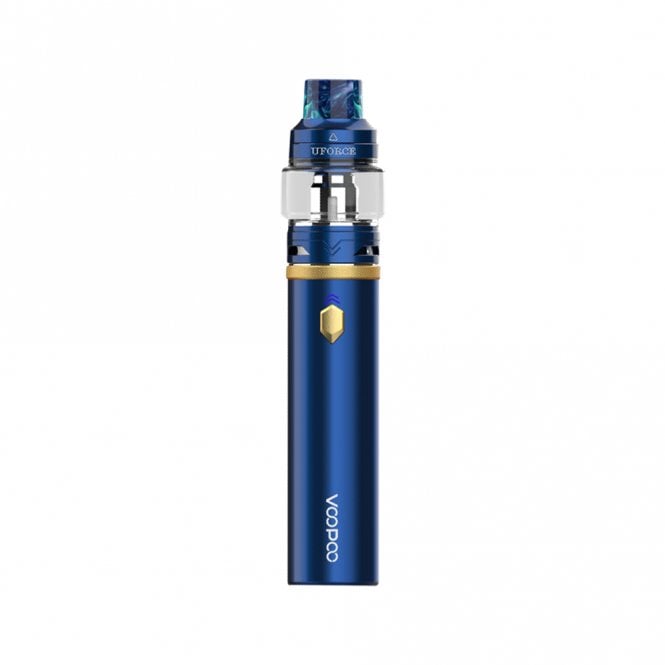 About the Voopoo Caliber Vape Pen

Voopoo introduces the Caliber, a state-of-the-art vape pen based on the GENE.FAN chipset. The Voopoo Caliber starter kit includes Voopoo's popular UForce tank with interchangeable U4 and U6 coils, offering a range of resistance levels suitable for sub-ohm vaping. The Caliber's advanced chipset automatically determines the correct electric output for the attached coil, leaving the vape pen's body sleek and simple. The firing button is ergonomically placed, and the Voopoo Caliber's machined stainless steel body makes the vape shockproof and satisfyingly heavy in the hand. The vape boasts a lightning-fast 10ms firing speed.

The Voopoo Caliber sports an integrated 3000mAh battery that can be recharged with a microUSB cable, included in the starter kit. The battery maxes out at a wattage output of 110w with a voltage output range of 0-4.2V. A LED indicator displays current battery charge status, so you won't ever accidentally run out of power.

The Caliber kit includes Voopoo's UForce sub-ohm tank, which can be outfitted with any UForce coil or glass tube, giving the tank a range of resistance ratings and a vape juice capacity of up to 5ml. The UForce tank is designed with a triple adjustable intake port  so you can precisely regulate airflow to produce smooth enormous clouds. The tank has a sliding top-fill port that easily opens to accept a vape juice of your choice and reseals tightly to prevent leaks and drips.

What's the quickest I can get my order?
We offer USPS Priority Express overnight shipping and USPS Priority shipping (1-3 days, not guaranteed) options in addition to standard shipping.
All shipping options and prices can be viewed and selected at checkout.
What does your packaging look like?
The packaging we use depends on your selected shipping option and order size. Generally, you will receive a generic first-class bubble envelope, Priority flat-rate envelope, or Priority flat-rate padded envelope.
The sender name will be "ET", with a return address in Boulder, Colorado.
What is the warranty period on this product?

The warranty period on this product is 90 days from date of purchase.

The product I bought is amazing. Nothing less than perfect!!! I thank you for doing business with me!

Good, simple, but you can’t remove the batteries

I love it!! It’s perfect for what I need. And the shipping!?! I live all the way down on the Gulf Coast and my package got to me in 2.5 days!! Fastest shipping ever!!

This and my Smok Veneno are my 2 faves out of six or seven devices that I own. The caliber gets a nice draw and gives a LOT of flavor. However... This is my 2nd Caliber because something went wrong with the base of the first one. The vape would only connect and fire when I fiddled around twisting and untwisting the tank. On the chance that it was my fault somehow, I have go t this second one. If this one goes bust, I will be done with Voopoo devices for good.

This is my 2nd Caliber. I loved my first one so much that I preferred it over my SMOK Veneno BB and my Pico Squeeze. However, something happened when and the vape has trouble firing. I have to manipulate the tank to get a fire. I figure I might have gotten a lemon so... this is my second one.

EXCELLENT!!!!!!! I had an orange one and it broke, so I needed another one. Got the gold, beautiful. This stick is awesome

I initially loved this but it has too many firing issues. When it works, it's my favorite, but it doesn't always work. Every time I replace the coil, the device stops firing. I have to fiddle with it, screwing & un-screwing the tank from the base until the thing works. I talked to someone I know who has the very same problem. I'm not looking for something to replace it & will probably never buy a Voopoo device again if I don't hear back from Voopoo support.

Produces a nice for half of vapor and a full flavored taste very nice. I recommend it to anyone.

I am so happy with this. I waited a long time before submitting a review because I wanted a long-term report. This vapes better than my Smok Veneno and I like that it is more streamlined. If I could, I would buy this again just to have more than one around.

PRO: Love the look (I got the Rainbow color). It creates a great cloud and when the hit is good it's great. I have a Smok Veneno and the Caliber is more reliable and even (hits and clouds). The Pros are more definite than the Cons
CON: It's slightly fatter than I thought it would be. Every now and then, the hit is a bit stronger than I want, and there is no way to adjust wattage. The tip is kind of cheap-looking a feeling and it comes off too easy. The most annoying thing is that I have a hard time telling where to push to open for refilling it although I may just be missing a marking or something.

I started, like most newbie vapers, with a Juul and moved up until I got a Smok Veneno (which I do love). I wanted something smaller and more portable for an upcoming trip. This Caliber is really cute and it does pack a flavor punch. The one and the ONLY thing I would change is that the mouthpiece feels cheap and the color doesn't go well with the Rainbow shade I have. I've seen reviews where people don't like the gold accents but I think it goes best with the Rainbow selection - or at least it looks okay on mine. I would definitely get one of these for a friend wanting more power than a pod.

I just really liked how cute it looked. It could be my great company for break time but I just had to let it go. Voopoo caliber has serious leaking issue. I tried to change coil several times thought it was a coil problem, bt turns out it was just the vape itself that just can’t hold juice. I’ve used different vg level juice to make sure.. the hole that supposed to air come out keep having juice leaking issue and it was also pretty annoying for me that I had limit to adjust the voltage of smoke.